is an Android app that allows you to remotely control a robot (or other device) via WiFi.  You can also (optional) view a video stream from an IP camera mounted to the robot.  WiFi Bot Control also provides up to 8 additional customizable command buttons that allow you to perform additional tasks on your robot / device.  You could use these commands to initiate other activities such as enabling/disabling sensors, moving other servos / arms / picking something up, turning a LED on/off etc.  With the provided sample sketch, you can customize the robot to do what you want.  WiFi Bot Control can be downloaded on Google Play and is compatible with most versions of Android and most device sizes from phones to tablets.

WiFi Bot Control is an Android app that allows you to control a device, presumably a robot.  For the sake of this write-up, it’s an Arduino robot using an Adafruit CC3000 WiFi module and a Digistump + Motor Shield.  However, you should be able to use most other WiFi shields and motor drivers.    WiFi Bot Control is pretty much useless on it’s own, but if you’ve read this far, you probably understand that this is a purpose-specific app.  Essentially, the system consists of the controlling device (your Android phone + WiFi Bot Control), an intermediate data interpreter/server (a webserver – or your local computer) and a robot of course.  Details on the different pieces are documented below.  This should provide you with sufficient info should you want to build one yourself.  Details on where to source the components are also below.

** If you are looking to use Bluetooth to control your robot, also check out BT Bot Control.  Also note that because the Android app links directly to your robot via Bluetooth,this is a faster method of control.  However, it is limited to approx 10 meters (Bluetooth limitation).

How to Use It

When you move the joystick, x and y coordinates are packaged into a configurable URL string and transmitted. The following is a sample URL where the x value is 22 and y value is 44. Note the URLmode value is 1. This information is parsed into a json file and then read from the Arduino robot / device.

In Simple mode, the joystick has 4 arrows representing Forward (U), Reverse (D), Left (L) and Right (R). When you tap the arrows, the respective character is packaged into the URLudlr value and the URL string is transmitted. Tapping the center or releasing a button sends an S value (stop). Tapping the Up arrow would look like this:

You can add custom features to your robot / device with additional commands and customize the sample sketch provided. When a Command button is clicked, a value (1-8) is passed to the URLcmdVal variable. (i.e. Command Button #4 sends URLcmd=4) Also note the URLMode value passed is 3. Below is a sample URL string:

This app uses the same approach for viewing an IP Camera stream as BT Bot Control.  Detail can be found in the instructions. Also see the FAQ section below.

At the time of this writing, there wasn’t a library to allow the Adafruit CC3000 to act as a server and process data requests directly.  Instead, I implemented a fork of this sample (thanks and credit Marc-Olivier Schwartz).  The basic idea is that when using WiFi Bot Control, the app constantly sends a URL request to a PHP file on a server (or a computer with a webserver on it).  The request contains updates to the x/y/command values (samples below).  The PHP file is called and populates the data file.  This is whole process is done rapidly from WiFi Bot Control.  At the same time the robot (sketch sample below) is constantly polling the server and calling a PHP file that parses the JSON file for the data contents.  It extracts the variables and uses them to drive the motors or act on commands.

You can host the server locally or remotely.  It must also have PHP on it, and write permissions to the JSON file(s).  On the Arduino side, the sketch points to the server IP address.  On the Android side, it can be the URL or the IP address of the server.  Note, if you are doing this within your own personal environment, you will have to ensure that the necessary port (usually 80) is open.  Also, the PHP file needs write permission on the json file(s).

Remote Control Only Files (can be downloaded below):

WiFi Bot Control has a feature (in Settings) to enable reading of data pushed from your Arduino device.  In addition to the above files, use the below files for reading sensor data.  The latest sketch (below) has a sample to show how to do this.  The below files are needed on the server to receive the request from the Arduino, process the results and also allow WiFi Bot Control to request them.  Details:

To use this feature, go to Settings and select Enable Sensor / Data Polling.  Then, configure if you want to use manual or timer-based polling.  The value for Polling URL tells WiFi Bot Control where the androidPull.php file is.  You can also configure custom titles for each data element passed.  To do this, enter the titles you want to use in the Result Titles box with a comma “,” separating each.  For example, if you have 2 values that you want to display, you could enter:   “Temperature C =, Humidity =” (without the quotes).  If you choose not to enter any values, it will simply display as “Result1= Result2= etc“. 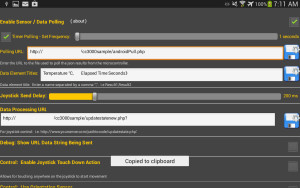 Eddie is comprised of a mix of Arduino Nano, LEGO components as well as an IP Camera.  The Nano uses the Adafruit CC3000 WiFi unit to talk to the server. Buried below is a power supply drive by 2x 18650 LiIon batteries (series @ 7.2v) as well as a power supply that drops the power to 3.5v for the IPCam and 5V for the Nano and CC3000. 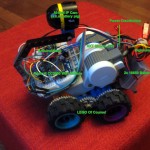 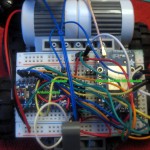 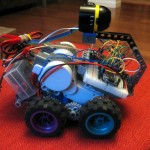 What equipment is needed?

WiFi Bot Control talk to a robot that you can build.  Here’s a breakdown of the main parts required:

The CC3000 and motor shield are connected to the Arduino Nano (pinouts below). The sample Arduino sketch provides a fully functioning application based on the base build. You can also add customize the sketch to your liking as well as enable features that can be used by the 8 custom command buttons.

Connections between the various modules and the Arduino Nano are as follows.   Not shown are the DC step down linear regulator. 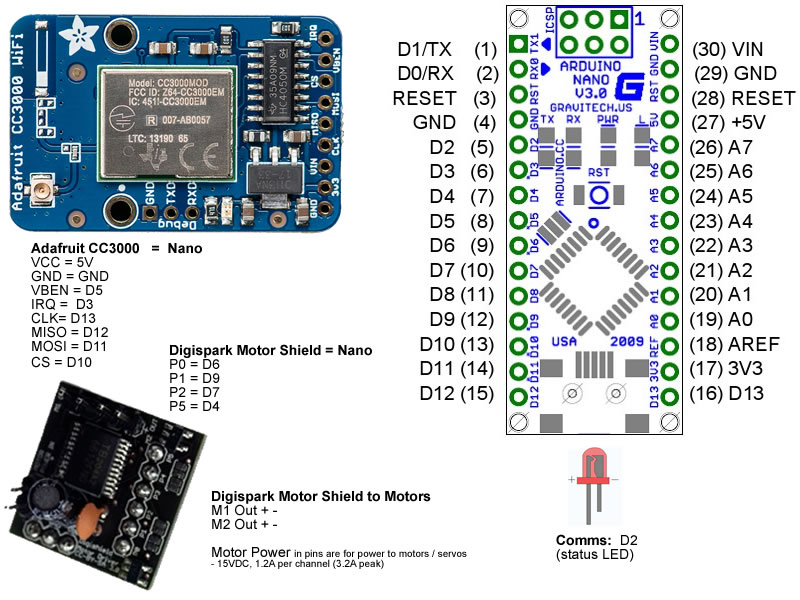 We have 4 guests and no members online

All demo content is for sample purposes only, intended to represent a live site. All content images are licensed from their respective sources for exclusive use on this demo only.