dScope Series III is a professional, industrial grade audio analyzer with calibration traceable to international standards. Standardised measurements are easy to achieve, and some such as AES17 and Dolby Digital tests are provided as standard with menu driven automation to make the measurements for you. dScope provides standard FFT window function s such as Hann and Blackman-Harris as well as software-optimised Prism Sound Window functions which provide the best performance in the industry. Continuous FFTs may be performed at up to 256k point resolution (1m point on soundcards) using 80-bit floating point precision. Measurement accuracy, especially of small residual s in the presence of large signals, is uniquely maintained. During calibration, dScope Series III requires no hardware adjustments: the entire calibration task is performed in software, and calibration coefficients are stored in non-volatile memories on their respective modules. Calibrations are therefore less prone to wandering than those made with mechanical trimmers, and modules can be interchanged without re-calibration. To ensure traceability, calibration is performed by Prism Sound authorised distributors using suitably-qualified references.

The dScope signal generator has two independent channels, and generates in the analogue, digital and soundcard domains simultaneously. As well as standard waveforms, the generator can source arbitrary waveforms (from wavetable s, WAV files or VBScript s) and synchronous multi-tones. In the signal analyzer, two-channel level, frequency and phase measurements are continuously available from either domain, as well as a two-channel continuous-time measurement function and up to 40 two-channel FFT-derived measurements.Digital carrier degradation and analysis capabilities include jitter, carrier amplitude, rise/fall times, sampling-rate deviation and auxiliary data (channel status, validity etc.). Graphical traces types include 'scope, FFT, sweep, analyzer residual and FFT of analyzer residual (all for both channels simultaneously) plus carrier eye diagram. Sweeps can be made of up to four parameters simultaneously (including carrier parameters). Competitive audio analysis systems are often 'modal': they are set up to perform a single measurement function - and that's all they can do until their 'mode' is changed. This is a consequence of their hardware based architecture and cannot easily be remedied. dScope Series III, on the other hand, comprises many independent "soft" instruments which can be used simultaneously. For example you could SIMULTANEOUSLY: Measure the amplitude, frequency, and inter-channel phase at the output of a stereo 'EUT'     AND... Measure THD+N on both channels with control over measurement bandwidth and weighting    AND... Record up to 40 complex FFT-derived stereo results (e.g. HF & LF roll-off, cross-talk etc.)     AND... Display a stereo 'scope and FFT trace (and maybe save them to a central network location)     AND... Characterise the EUT's S/PDIF digital I/O (e.g. Eye pattern , jitter performance) dScope's 'concurrency' is very powerful in production-line applications, where it allows test times to be slashed. Its ability to display these parameters at once is also very useful in development and research as it allows dependencies and trends of different parameters to be easily observed from one user interface, (including the ability to view a 'scope trace and bar-graphs without an external oscilloscope or meter).dScope Series III delivers the versatility and precision needed for testing the latest audio technology. Whether your application is digital, analogue or soundcard, consumer or professional, broadcast, multimedia, CD, DVD, computer audio, transducer testing, digital telephony or communications, dScope provides the perfect audio test solution for all types of operation: It is comprehensive and accurate for R&D, portable and intuitive for maintenance and field service, and fast, automatic and IT-friendly for the production line. The dScope audio analyzer covers the whole range of traditional audio measurements, including:

In addition, the dScope Audio Analyzer incorporates important new features needed to work with the latest audio technologies. These include digital interface test tools such as carrier waveform and eye-pattern display, jitter measurement and AES3/IEC60958 channel status generation and analysis. Sample rate support is not only for the standard sampling rates like such as 44.1kHz and 48kHz but includes sample rates up to 192kHz. The dScope audio analyzer has comprehensive FFT analysis features, and a uniquely simple, state-of-the-art synchronous multi-tone capability which can measure dozens of parameters simultaneously. All this is provided without any costly optional extras, providing market-leading functionality at a remarkably affordable price.

One of the key drivers in production test is to reduce test times, enabling an increase in throughput, a reduction in cost per unit, and increased profits. This is particularly the case in high volume audio production tests, where the test equipment is required to test at high speed and at low cost. Multi-tone testing is one way in which the dScope Audio Analyzer meets these needs. A number of individual tones are generated simultaneously and analysed using FFT analysis, enabling tests to be carried out at all frequencies simultaneously. The result is a massive reduction in test times. Read more about Multi-tone measurements here.

dScope Series III implements a couple of different methods of measuring acoustic transducers without the effects of reflections from the surrounding environment. Both rely on deriving an impulse response from time domain data in a similar way to traditional MLS methods, but dScope doesn't actually use MLS. Instead it uses either a log swept sine / chirp, or a "bin-centres" multi-tone. The former is particularly powerful as it allows not only the measurement of the frequency response of a device, but the frequency components of the individual distortion harmonics. The "bin centres" signal is a special case of multi-tone signal that has tones at the FFT bin centre frequencies. It can be pink weighted and has some useful properties when it comes to measuring over a limited range of frequencies as the analysis algorithm can remove unwanted frequencies from the calculations, keeping the noise under control. For more information, see the impulse response application note..

The dScope Series III audio analyzer software exposes a very large set of ActiveX controls to allow it to be controlled from third party software. Almost anything you can do on the dScope can be controlled from external applications. These applications include most software development tools such as C++, VB etc. and test systems such as LabVIEW and TestStand.For those needing to include professional, high quality audio testing in their manufacturing test systems, the dScope audio analyzer is ideal. It can be controlled and read directly from TestStand via the standard ActiveX adapter provided within the TestStand environment, making it quick and easy to integrate the into any ATE or production test system.

Built in automation and programmable functions

The dScope Series III is highly programmable using standard Microsoft VBScript or JScript. This capability is built in, including an editor to write your own scripts. Almost everything that can be done on the dScope through the user interface can be automated and controlled. You can: • Load and save configurations (a snap-shot of the entire dScope set-up)• Manipulate configurations to change dScope settings• Create test sequences with logic to control flow or give pass/fail• Create User controls such as check-boxes, sliders etc.• Retrieve, format and display or save results• Export results in a wide range of formats: txt, html etc.• Export or print graphs• Link into other software such as Excel, or Word to read or write results• Control third party software and hardware using ActiveX controls• Access audio data and the FFT data buffer directly for custom analysisVBScript is easy to learn and very powerful. Because it is not compiled, all the scripts provided with the dScope audio analyzer can be opened in a text editor and inspected or manipulated. 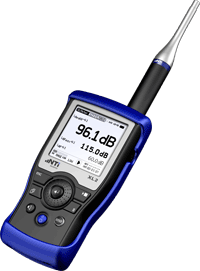 We have 3 guests and no members online

All demo content is for sample purposes only, intended to represent a live site. All content images are licensed from their respective sources for exclusive use on this demo only.